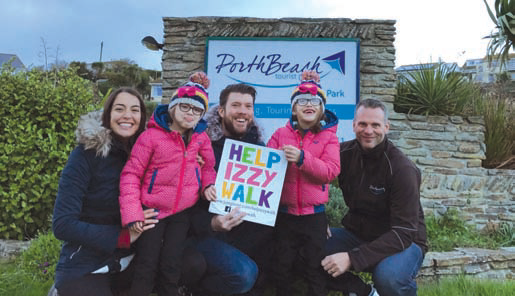 Staff and guests at Porth Beach Holiday Park in Newquay have raised £1,000 to help a young girl from Cornwall undergo a pioneering surgical procedure in America. Six-year-old Izzy Pearce suffers from cerebral palsy and is unable to walk properly or stand unaided.

Her parents, Michael and Ursula, learned of the potentially life-changing operation known as Selective Dorsal Rhizotomy (SDR) – but discovered it was not available on the NHS and so began a huge fundraising campaign.

Porth Beach Holiday Park made the very first donation on Izzy’s JustGiving page and kick-started the campaign. The family reached their £86,000 target in October - and donations continue to flood in.

All money raised over the target will go towards Izzy’s post-op physiotherapy that she will require over the next few years. Chris Case, Manager at Porth Beach said he was pleased to have helped such a worthy cause.