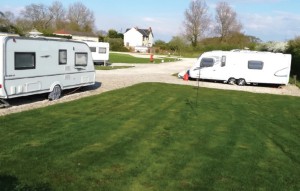 Brenda House touring park is a labour of love...

It had always been Fiona and Neil Sidebottom’s ambition to run a touring caravan park.

They purchased Brenda House, a mile or so from the historic town of Howden, in the East Riding of Yorkshire, that was built 1900 by the local brickyard owner. Through the years the site had been developed into a smallholding.

The park now has 24 hard-standing pitches, of which ten are designated as seasonal. These have been fully occupied since 2007 and most of the current occupiers have been with the park since then. All the work to develop the park and modernise the property was undertaken by the owners.

Brenda House Touring Caravan Park is exclusively for adults only, which includes all visitors to the site. Well-behaved dogs are always welcome, and the park offers a secure fenced off walking area at the very top of the site where dogs can be allowed off the lead.

Fiona and Neil take pride in having produced a peaceful and secluded caravan park located in idyllic countryside at the foot of the Yorkshire Wolds. It is set in three acres of land and has regular visits from barn owls, deer, kestrels and a myriad of bird species.

The touring park is open each year from March to October and sees many visitors repeatedly returning. It is such a popular site that Easter 2018 was fully booked by the first week in January.