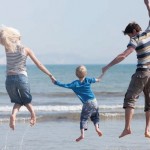 The holiday park industry is feeling optimistic as we head in to 2016.

Our notoriously unpredictable weather had a major impact on holiday park fortunes across the UK and Eire throughout 2015.
Record-breaking spring temperatures, particularly for southern parts of Britain, petered out with a largely disappointing second half summer performance.
Unprecedented mild weather in October and November had a sting in the tail with flooding devastation following Storm Desmond intensifying the North/South divide.
Enjoying a record-breaking year, the Holiday Park Scene magazine team featured nearly 300 parks throughout 2015 with facts and information from nearly 400 specialist suppliers. Here we bring you just some of the headlines...

The Holiday Park Scene team launched a record-breaking year with tips for maximising the potential of swimming pool appeal in Swim To Win. We had a bucket load of tips and advice on the best return on investment in indoor play with Weather Proof. As we delved into the cabin and lodge market, we reported how five star, luxury accommodation was paying dividends for many Parks with our feature Home From Home. We launched our 2015 tour with a stay at Seafield Caravan Park in Northumberland with a picture Holiday Scene postcard from Claire Jeavons at Beverley Holidays in Devon.

The team was intent on Playing It Safe with a spin around outdoor playgrounds while we explored efficiency measure to cut park overheads in The Energy Trilemma. Our UK tour continued back in Devon as we featured Beverley Holidays in our regular On Location spot while Andrew Howe of Bridge Leisure gave us his Holiday Scene postcard. Shock news of a temporary closure of the popular Potters Resort in Norfolk following a suspected outbreak of the winter bug Norovirus was among the headlines for our spring issue of Holiday Park Scene.

We are all set to Carry On Glamping as we looked under the luxury canvas market while exploring five star spa and wellness options we urged you to Exceed Expectations. The team went back to basics with a review of washroom facilities in A Matter Of Convenience and looked forward to some of industry’s top summer attractions in Here Comes Summer. Always looking to break fresh ground, we launched our Hot Property column featuring Parks for Sale while Patrick Langmaid of Mother Ivey’s Bay gave us his Holiday Scene postcard and the roadshow stopped at Forest Park, near Cromer in Norfolk for On Location.

Our UK roadshow was back in Devon for On Location with a pitch booked at the Dornafield Caravan Park in Newton Abbott. Our Holiday Scene postcard came from Hywel Davies, the owner and manager of South Wales Caravan Park in Llanelli. Operators remained cautiously optimistic as we looked at the key performance indicators in Memory Makers reporting a three percent rise in tourist spending in 2014 compared with 2013. We went into Lock Down as the team investigated the thorny issue of holiday park security and looked forward to some Splash Landings with a range of aquatic play options.

Park operators were urged to capitalise on silver investment by increasing provisions for the 50+ sector in our September issue. We focused on Return On Investment as we suggested some timely upgrades and refurbishments. Meanwhile we looked to make a dent in running costs with a look at cost-efficiency in Super Heroes. We researched online booking and management systems in Net Gains but looked to maximise the Best of Both Worlds with luxury accommodation packages. There was still time to delve into the world of natural swimming pool ponds in Balancing Act. Our Holiday Scene postcard was posted by Zoe House from the award-winning Ladram Bay Holiday Park while we explored the New Forest with a visit to the Sandy Balls Holiday Village in On Location.

We began our November issue by Keeping Up Appearances with our look at grounds maintenance as we delved into Winter Wonderlands and parks that offered all-year round four season appeal. We were Making A Splash in stand-out pools and soaked up a Lap Of Luxury with a look at the holiday hot tub market. All eyes were on the £960 million merger between mega groups Parkdean and Park Resorts while we eagerly anticipated the Holiday Park & Resort Innovation exhibition with It’s Show Time. Our end of year roadshow stop for On Location pulled up at Pentewan Sands in Mevagissey Bay, Cornwall, while November’s Holiday Scene postcard came from William McNamara of Bluestone National Park Resort.