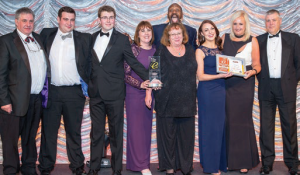 ABOVE: Warfield Park has been named the National Social Responsibility Company of the Year.

A residential park in Berkshire has hit the mark at the National Energy Efficiency and Healthy Homes Awards 2017. Warfield Park in Bracknell claimed the title of National Social Responsibility Company of the Year. The award recognises the ambitious upgrade programme to improve energy efficiency and performance of park homes at Warfield which recently marked its 70th anniversary. Energy efficiency measures have been installed in 29 rental park homes under a government initiative, and the park has assisted 49 private residents to do the same during 2016. Apart from improving living conditions for residents, projected energy savings are anticipated to be in the region of £500 per year per home. The works on the 90-acre park were carried out by two companies: Omar Skinner and Sons and Insulated Homes Limited, the latter nominating Warfield Park for the award.