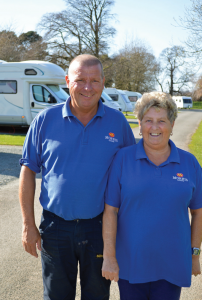 Stanmore Hall Touring Park in Shropshire has appointed a new management team for the new season. Gary and Tania Smith have been promoted to managers of the Bridgnorth park and will be supported by new assistant managers Nick and Sandra Bellinger.

The Smiths have worked for park owner, Morris Leisure, for five years, having previously served at Oxon Hall Touring and Holiday Home Park, Riverside Touring and Holiday Home Park and Ludlow Touring Park. Before becoming caravan park managers, Tania worked as a chef for 32 years and Gary worked as a landscape gardener for 27 years for Birmingham Council. “We were at that time of life when we both wanted a change of lifestyle,” explains Tania, who has two children and five grandchildren.

“Gary was working nine to five while I was working evenings and weekends and we hardly saw each other” “We now see each other 24-7 and absolutely love being park managers.” Assistant Manager Sandra Bellinger added: “Morris Leisure is a great company to work for and our only regret is that we had not stayed at one of their parks before we started to work for them. It’s definitely something everyone should try.”