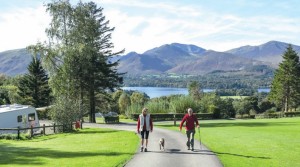 Castlerigg Hall in Keswick, Cumbria, took the top spot as the Regional Campsite of the Year for the North West.

Vale of Pickering Caravan Park in North Yorkshire has been crowned the Campsite of the Year 2017 at the AA Caravan and Camping Awards. The park beat off stiff competition from 860 sites across the country, which were all visited by the AA’s campsite inspectors to assess the touring pitches, facilities and hospitality.

Each park is graded from one to five pennants, with Gold Pennants awarded to the very best. Since winning an AA regional award in 2013, owners of the Vale of Pickering Caravan Park - Chris and Dianne Stockdale - have continued to invest in the park each year, including a new state-ofthe- art facilities block which has six fully-equipped wet rooms and a dishwashing room. New electric points and a dog wash, with a hot shower were also added to the park this year.

Another notable winner this year was Forest Fields Caravan and Camping Park in Powys, which was named AA Campsite of the Year for Wales. The family-run park, which is located near to Royal Welsh Showground, is popular with families and outdoor adventure groups. The park’s owners - the Barstow family - also has plans to expand the glamping offering in 2017.

Elsewhere in the country Castlerigg Hall in Keswick, Cumbria took the top spot as the Regional Campsite of the Year for the North West. Owned by the Jackson family since 1938, the park provides luxury caravan holiday homes for hire, plus eco-friendly camping pods and pitches for touring caravans, motorhomes. A former farm which began by welcoming campers, Castlerigg Hall is today one of the Lake District’s most highly regarded parks. 2017 also saw the introduction of a new award – The AA Glamping Site of the Year, to celebrate the increasing popularity of glamping. The winner of this brand new award was Durrell Wildlife Camp in Jersey, which is situated in 32 acres of landscaped parkland and water-gardens offers guest the opportunity to stay overnight in stylish Ecopods with unlimited access to some of the rarest wildlife species on earth.