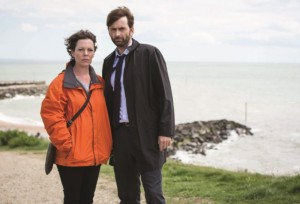 Fans of TV drama series Broadchurch have helped set a record year for visitors to West Dorset, according to a major holiday parks group in the region.

West Dorset Leisure Holidays says bookings are currently up 25 per cent on last year’s figures as families go in search of the picturesque vistas and seascapes seen on screen.

The final series of the award-winning drama finished in April, and the parks’ General Manager, James Cox, said that enquiries began to swell from the first episode: “We experienced similar uplifts during the first two series of Broadchurch, and many of those guests became repeat visitors – so obviously the county lives up to expectations!

“Now with this latest wave of demand, we are expecting to see the busiest year yet for our business, and will be helping to point families to some of the locations seen on television.

Family-owned West Dorset Leisure Holidays owns five holiday parks in the region, including its flagship Highlands End Holiday Park in Bridport. All parts of the business have seen booking figures rise, says James, and there has also been an uplift in sales of new and pre-owned caravan holiday homes.