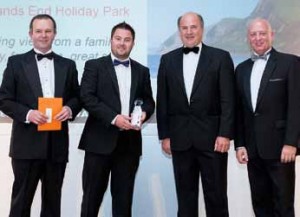 The family-owned holiday park based in Bridport scooped two gold accolades for its flagship Highlands End holiday park. It took both the Holiday Park of the Year title, and the Sustainable Tourism award.

The icing on the cake came when the group’s managing director Martin Cox was awarded a special honour for Outstanding Contribution to Tourism.

Launched for the first time this year, the awards highlight the many excellent businesses operating across the county as well as promote Dorset itself as a top quality destination. The competition attracted 60 entries, each undergoing a rigorous three-stage judging process including visits by a team of mystery shoppers, and final assessment by an independent judging panel. Finalists came from across the county with hotels, pubs, attractions, festivals, holiday parks and B&Bs amongst the list of winners.

West Dorset Leisure Holidays’ Sustainable Tourism award also follows other honours won for its care for the natural world, including recently the David Bellamy Conservation Award at its top gold level. A host of environmental initiatives at Highlands End have included energy-saving measures and successful moves to protect wildlife with the creation of animal and bird habitats.

The park has also been praised for its links with the local community, and its charity work which includes raising over £36,000 for the Jurassic Coast Trust over the past five years.

Although the cliff-top Highlands End holiday park is no stranger to awards, Mr Cox said he was especially delighted for it to be named as Dorset’s Holiday Park of the Year and that his personal award for outstanding contribution to tourism had come as a complete surprise.

Highlands End, along with other category winners, will now be fast-tracked into the South West Tourism Excellence Awards in January 2014. Success here will then see winners move on to the National Visit England Awards later in 2014.