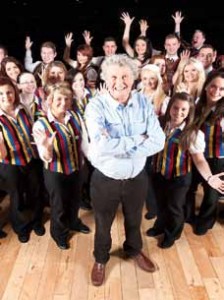 Holiday park magnate John Fowler
has passed away at the age of 86.

From humble beginnings, the company was founded when John left his Merchant Navy ship in 1953 with aspirations of a business life ashore in Cornwall and with just his £300 pay-off in his pocket. Without a house, job or car to help him in his determination to start a business, John bought an old pre-war caravan for £100 and completely refurbished it. He had noticed visitor demand for the independence of a self-catering holiday as an alternative to traditional boarding houses or hotels.

After a round of phone calls from the village green phone kiosk he found a neighbouring farmer with permission to site the van. The agreed place was no more than a lonely grass field, without electricity or roads, but just a short scramble to a sandy beach, and a brief bus ride to Newquay. A single chemical lavatory, plus an outside tap for drinking or washing water, were the only two concessions to holiday facilities. John spent 6/6d (33p) on a small advert in a Midlands newspaper and when cash bookings started to arrive in the post ploughed all income straight into more caravans.

Within weeks he had the beginnings of a very small holiday business. Now a multimillion-pound chain of 14 holiday parks spread across the south west, John Fowler Holidays was recently ranked at number 32 in a list of the 150 biggest firms operating out of Devon and Cornwall.

The company has also been recognised in the Sunday Times Profit Track 100 list of the UK’s 100 fastest firms for profit-growth. John, who passed away in September, leaves behind his wife Susan, five children and several grandchildren. There is no doubt that he has left a large gap in the industry, in many people’s lives and some very happy memories too.