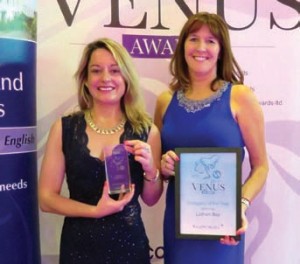 Ladram Bay Holiday Park has been crowned ‘company of the year’ in a major award scheme celebrating successful women in business.

The park was named as overall winner in the 2016 Devon Venus Awards in November. Competition was fierce this year with almost 2,000 nominations and applications received in one or more of the different categories of the awards.

Stepping up to receive the accolade were director and member of the park-owning family member Zoe House, and Ladram Bay’s General Manager Claire Williams.

Zoe House commented: “We have always believed in providing equal career opportunities for both women and men, and in helping employees achieve their goals with support and training. “This award is for everyone who works at the park, and we would like to thank all those who have supported us along the way,” added Zoe.