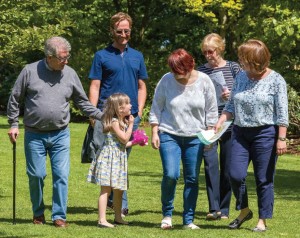 Young families teaming up with grandparents for holidays have seen a marked rise this year, according to a major Lake District holiday park. Silverdale park in South Cumbria says that ‘gramping’, as it’s known, has been making a big comeback after decades of decline.

“When Silverdale first started out in business 60 years ago, it was quite common for three generations of the same family to go away on holiday together,” he said.

“But now British staycations are back in demand, families are using the opportunity to enjoy each other’s company in the way they once did. As well as sharing the expense, it also means mum and dad have a built-in child care service so that they can make an occasional escape and be just a couple again,” he added.

Michael says that the gramping phenomenon is also resulting in more families sharing the cost of buying a caravan holiday home.

“We’ve been seeing many more people this year doing their sums and realising the considerable financial benefits of shared ownership,” says Michael. “And once again, it’s the local economy which benefits as more visits mean more spending in businesses such as shops, pubs, restaurants and visitor attractions,” he added.