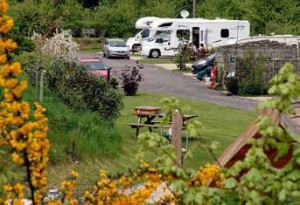 A camping park near Stonehenge, now a popular spot for pagan weddings, has won a special environmental award from TV botanist David Bellamy.

Stonehenge Campsite, where summer solstice festivals and pagan weddings are among the attractions, is one of Southern England’s greenest places to stay says botanist David Bellamy.
The camping park, which also provides glamping pods, has scooped a top gold accolade in the David Bellamy Conservation Awards to add to its ever-growing list of honours.
Located in Berwick St James, two miles west of the new £28 million Stonehenge visitor centre, the park opened five years ago on part of a nine-acre smallholding of naturally screened pastureland.
A recent report by assessors from David Bellamy’s Conservation Foundation, which administers the award scheme, said the park was a haven for many different types of fauna and flora.
Open all year, the park attracts guests from all over the world, especially during the annual summer solstice festival in June. Two pagan weddings have already been held on the park, and others booked and planned.
Owner William Grant said: “For over a hundred years my family has farmed this area through three generations, and it is a very special part of England both to us and to many other people. I hope we are showing that tourism enterprises such as ours can work in harmony with the natural world whilst bringing significant economic benefits to rural regions.”