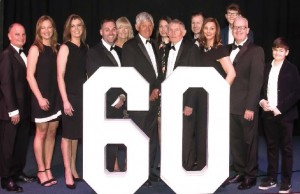 Reaching the major milestone of 60 years is no easy feat for any business, but family run Beverley Holidays is bucking the trend as it celebrates six decades of shining bright on the holiday park scene in 2018. Situated on the sunny English Riviera, Beverley Holidays was founded by Joseph Stanley Jeavons and his wife Marion in 1958 after they transformed 20 acres of farmland into their holiday park dream. Born in Wolverhampton, ‘Stan’ crowned the site Beverley in homage to his beloved Wolverhampton Wanderers FC who’s then captain Billy Wright was married to a member of the ‘Beverley Sisters’. Regarded as Britain’s first female pop group, the ‘Beverley Sisters’ became familiar faces at the Paignton-based holiday park where they regularly performed to its growing number of guests. Fast forward nearly half a century and while you won’t find the singing sisters treading the Beverley Holidays boards today, the forward-thinking philosophy of its founder ‘Stan’ remains the same. Now in its third generation of the Jeavons family, its owners continue to provide guests with the same holiday magic as it did more than six decades ago by constantly refining the guest experience. The last few years have been no exception, with a cool £3million invested in a fleet of super stylish hot tub holiday lodges and caravans for those seeking a seaside staycation with a sprinkling of glamour. As a fitting tribute to its 60 years of success, family run Beverley Holidays was officially named one of the top three best holiday parks in Britain at the prestigious 2017 British Travel Awards.