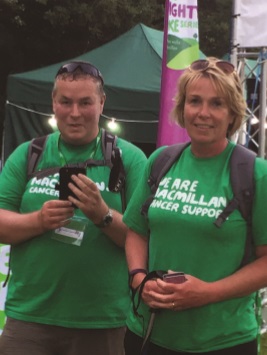 Residents at Lamalech Park Estate have helped raise over £800 for Macmillan Cancer Support. They backed the owners of the park, Ruth Ross and Paul Lancaster, as they decided to tackle a gruelling 26-mile charity trek through the Lake District.

The journey took the brother and sister duo 11 hours, all of which off-road, but upon reaching their destination in Ambleside, they knew they had reached their goal with the help of donations from the residents’ social club and from individual owners of the 120 homes on the estate. Fundraising activities for good causes are an important part of social life at Lamaleach explains Ruth. “Having received such amazing support from so many kind-hearted people, we knew there was no way we could go back having thrown in the towel,” she added.

Lamalech Park Estate have also won a Gold Award from North West in Bloom, and Ruth says that residents also play a big part in helping to create a real community atmosphere on the park. Ruth and Paul’s Lake District trek was organised by Macmillan Cancer Support, one of Britain’s largest charities which is dedicated to assisting people affected by the disease.