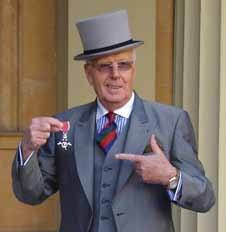 Brian Potter proudly collecting his MBE at Buckingham Palace in 2012.

Tributes have been paid to Brian Potter MBE, whose customer service ethos ensured the successful growth of one of Norfolk’s largest holiday businesses.

Brian passed away peacefully in November aged 73. He is mourned by his family, the 550 current staff of Potters Resort and the many tens of thousands of guests who he personally welcomed over the years.

From an early age Brian learned the family business, Potters Resort in Hopton-on-sea, from the ground up; working pretty much every job one can think of in hospitality in order to understand exactly what goes in to making a guest’s holiday special. Holiday centres were in his blood and it was only fitting that his wife, Judy, with whom he recently celebrated his golden wedding anniversary, came from another pioneering family of the holiday centre industry at Seacroft, Hemsby.

Brian and Judy lived and worked together for fifty years, building a business that has gone from strength to strength. Brian turned Potters Resort into a year round holiday destination. He developed an out of season midweek business by focusing and investing in the sport of bowls, and filled the weekends with entertainment led short breaks, that anticipated the UK leisure industry’s shift from longer holidays towards short breaks. It was his foresight, determination and drive that ensured that not only did Potters survive as the last of the pioneering family owned resorts in the country, but thrived.

Under his stewardship, Potters achieved the highest five star designation from VisitEngland, a recognition that it enjoys to this day. It was the first UK Holiday Centre of the Year, and received numerous hotel, and leisure industry awards. Brian was immensely proud to have been recognised for his services to tourism, by being elevated to the rank of MBE in Her Majesty the Queen’s Birthday Honours List in 2012.

Among his many charitable endeavours he was vice president of the Gorleston Lifeboat Fundraising Committee, patron of the recently opened James Paget Hospice, a lifelong Rotarian and Lord’s Taverner.