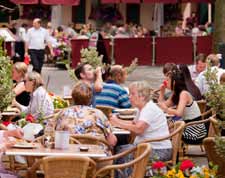 There were more visits to the UK during January-June period than ever before.

Business has been officially booming for UK tourism this year, after record numbers of tourists visited the country from January to June.

David Edwards, head of research and forecasting at VisitBritain commented: “Tourism is an essential part of the wider success of our economy and these first six months have set us up for what could be another record year for inbound tourism.

“It’s also hugely positive to see growth both from our high volume European markets and also emerging markets across Asia and Latin America.”