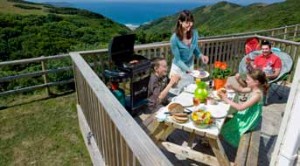 Woolacombe Bay Holiday Park in Devon is just one of a number of parks that saw a boost on bookings during January and February.

Record Breaking Start To The Year

The UK could be in for a bumper tourist season as 2015 got off to a flying start for holiday parks across the country, with many enjoying record-breaking booking figures in the first few weeks of the year.

It is estimated that around a third of all summer holidays are booked during January and February, with early birds looking to snap up the best deals and accommodation on offer.

One of Devon’s biggest independent holiday parks, Ladram Bay Holiday Park, saw a surge in bookings and figures were up by nearly 50 per cent on this time last year. The award winning park on the Jurassic coast saw bookings rise by 46 per cent in the first full week of January and then by 52 per cent the following week, compared with the same period in 2014. The holiday firm has now launched a recruitment drive to meet the anticipated high demand for the tourist season.

Director of Ladram Bay, Zoe House said: “It’s very busy and that’s great news for us and testament to the enduring appeal of the West Country and the work we are doing to continue to improve the Ladram Bay experience whether people are staying with us in holiday homes, apartments, lodges, motorhomes, caravans or camping.

“2014 was very good for us but this year people seem to be making their decisions earlier and not just for their main summer break.”

Mirroring the trend, another of Devon’s popular parks, Woolacombe Bay Holiday Park reported its biggest ever online booking day on January 31st, representing an increase of 35 per cent on the same day last year. The park has seen high demand Easter since the school holiday period has been condensed into two weeks as opposed to three in 2014 and also for Spring Bank Holiday as more families are now using it for a second holiday to complement a main summer getaway.

Hoseasons also enjoyed a 16 per cent increase in online bookings as demand for domestic holidays reached peak levels in January. Lodge holidays performed particularly well with bookings up 17 per cent, while boating holidays also started the year well up 12 per cent.