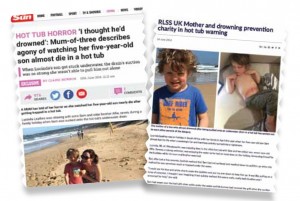 Following an entrapment incident involving a five-year-old British boy while on holiday in South Africa, UK hot tub suppliers are strongly emphasising that such cases are extremely rare and the vast majority of UK hot tubs pose no risk.
In April, Sam Leathes was holidaying with his family when he became trapped underwater in the hot tub. Sam had swum over the hot tub’s drain and his tummy covered the grille, when the suction pressure from the circulation system entrapped his stomach on the drain.
Quick-thinking family members frantically found the hot tub’s control buttons and managed to release the vacuum. Sam was pulled unconscious and blue out of the water, but came round and has since made a full recovery.

While it is important for owners of holiday hot tubs and swimming pools to be constantly vigilant of all potential risks surrounding spas and hot tubs, manufacturers say entrapment cases are rare and the majority of hot tubs pose no risk.
Commenting on the incident, Lloyd Burden of leading hot tub manufacturer Hydropool said: “We sympathise with the family involved in this incident but can confidently say that, because of the methods of modern portable spa construction, it would be unlikely for a similar incident to happen in the UK,” he said.
“But for older or non-portable spa installations such as concrete spas, we would strongly recommend an
independent safety check.”
Burden adds: “If any holiday park operators would like reassurance, then I would suggest they go back to their suppliers for confirmation on a brand by brand basis.”
Many companies within the UK’s pool and spa industries have been campaigning to raise awareness of the dangers of entrapment for years, much of which fall on deaf ears.
These include Mineral Supplies International (MSI), which has supplied the Vac-Alert anti-entrapment device to UK and European markets since 1996.
Installed on both pools and hot tubs, the Vac-Alert responds within a millisecond to any increase in filter pump suction; spring-loaded pistons open the pipe to atmosphere, freeing a person trapped by life-threatening suction.
“Entrapment has severe consequences and in many recorded cases globally can be fatal, particularly in the case of younger children,” said MSI’s Bob Kent.
“This is why we have been working with major holiday operators and cruise liners who want to demonstrate when it comes to their customers, they will put duty of care first every time.”