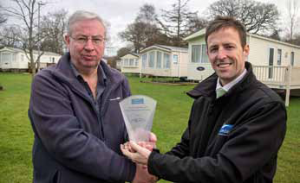 Dolphins River Park has been recognised for steps they have taken to reduce the risk of flood damage, including raised bases.

Dorset-based Dolphins River Park has been awarded the 2014 Leisuredays Risk Management Award for its work in reducing flood risk.

The annual award commends leisure parks that demonstrate superb risk management and help to minimise potential claims. Situated in Bridport close to the River Char, Dolphins River Park was severely flooded in July 2012. The park has since undergone a topographic land survey and installed raised bases on many of its units.

Leisuredays Business Development Manager, Alan Dixon, who presented the award to Park Manager Terry Gilbert, said: “Dolphins River Park’s risk reduction success is undeniable. The park was devastated by the summer floods in 2012, which damaged multiple units. Now in 2014, thanks to its commitment to reducing risk and its ongoing investment, Dolphins River Park is the perfect example of how risk management can help protect parks from the threat of flood and adverse weather.”

Leisuredays flood consultant has worked closely with Dolphins Park to survey the land and monitor flood risk on the park. This, coupled with the success of raised bases, ensured that no units were damaged by flood in 2013 and early 2014. Commenting on the award, park manager Terry Gilbert said: “Knowing that other parks in the country have flooded - some worse than ours - it is an honour to receive the award in recognition of all our hard work. Risk management is important for the safety and wellbeing of caravan owners, and it helps to keep insurance premiums down."