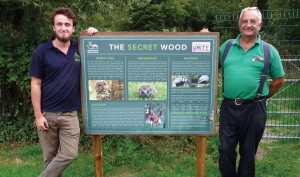 A Somerset holiday park which has helped release hundreds of birds and animals into its woodlands has been praised by the charity behind the scheme. Holiday Resort Unity in Brean Sands has been working this year with Secret World Wildlife Rescue to give crisis-stricken creatures a fresh start in life. Each has been cared for by the charity following injury, sickness, or being abandoned by its parents – and then put back into their natural habitat on the park. Now Holiday Resort Unity has celebrated its successful partnership by naming its two acres of woodland after the volunteer-led charity. From now on, it will be known at the park and on local maps as Secret Wood. Holiday Resort Unity, which has been family-run for over 70 years, is one of the Somerset coast’s largest and most popular parks with holiday homes to let and buy.