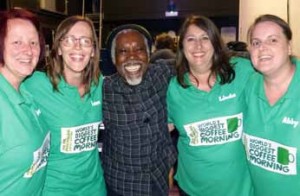 Fundraisers who decided to hold a coffee morning to support a cancer charity, ended up raising £10,000 after it got Billy Ocean’s backing.

The group were surprised when the recording artist turned up at the event at Bunn Leisure Holiday Park in West Sussex. The friends had hoped to raise a few hundred pounds at most when they agreed to host a small event in aid of Macmillan Cancer Care.

But the fundraiser took on a life of its own after the group asked Bunn Leisure Holiday Park, where they all own caravans, whether they could use a few tables at one its entertainment venues to host the event. Staff at the park offered their support and helped spread the word among owners and holidaymakers. Then pop star Billy Ocean, who was performing at the park, lent his support by posing for photos and offering a signed shirt for auction.

Fundraiser Abby Garner, said: “I had a vision that we’d get maybe 30 or 40 people and raise a couple of hundred pounds. I thought if a few of us got together we could do our little bit.

“We had raised about £5,000 before the doors even opened thanks to the raffle tickets and sponsorship. And on the day we raised that much again. We were stunned that from such a small beginning we raised so much.”

John Bunn, managing director of Bunn Leisure Holiday Park, said: “Abby owns a caravan here on the park and is a regular visitor – and when she asked for help, we were all too pleased to do everything we could to help her raise money for this worthy cause.” He added: “I’m delighted the team have raised so much and pleased that we were able to support those who put so much energy and effort into this extraordinary fundraiser.”