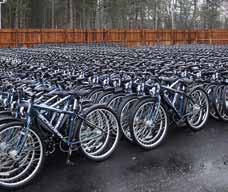 Thousands of Center Parcs bikes are
geared up to go at the new Woburn Forest Village.

Officially open from Friday June 6, Center Parcs has taken delivery of 2,300 bikes at the newly completed Cycle Centre at Woburn Forest site in time for the village’s official opening later this spring.

Cycling has become synonymous with Center Parcs, with more than 20 per cent of guests choosing to hire a bike during their stay, and many more bringing their own. The new bikes will add to Center Parcs’ fleet of over 10,000 – making Woburn Forest one of the largest fleets in the UK.

A further 300 cycles have been allocated for the site team including housekeepers and technical services. Following a decade of planning and a massive £250 million investment, the new Woburn Forest village will welcome over 400,000 guests per year.

Short break bookings are already being taken for arrival from 30th June 2014 and spring breaks are expected to be released soon.