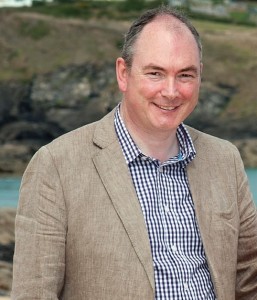 Park owner Patrick Langmaid, has been chosen as the winner of the Living Wage Leadership Award 2015 for the South West region.

Keen campaigner for the living wage, Patrick Langmaid, has been chosen as the winner of the Living Wage Leadership Award 2015 for the South West region.
The Cornish businessman was the Living Wage Foundation SW overall champion and in addition, Patrick’s Mother Ivey’s Bay Holiday Park in Padstow was also declared the winner of the Living Wage Employer Champion Award in the South West.
Award judges highlighted the tireless campaigning for the living wage which Patrick has carried out both within and without the tourism industry, and the fine example set by his business.
Patrick has already argued the case for the living wage on television and in the Press, and he says he now intends to use the publicity from his two awards to help spread awareness even more widely: “For many businesses, including mine, the living wage does represent an additional cost, but I believe there are also tangible savings to be made from managing a happy workforce.
“I know from our experience that a firm’s long-term interests are often best served by looking beyond the immediate impact of salaries on the balance sheet.
“Productivity, loyalty and staff retention are just two important factors which can translate into an overall cost benefit for the business,” he added.