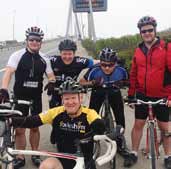 Park Holidays group in the saddle.

Park Group In The Saddle

A group of Park Holidays UK employees have completed a gruelling 230 mile cycling trip to France, to promote Britain as a go-to holiday destination, ahead of the 2014 Tour de France.

The ten men set out on the last weekend in March, wearing what is believed to be the first of the Grand Départ yellow jerseys to be seen in Britain.

Established in 1903, the race is the third largest sporting event in the world. Set over three weeks and covering 3,500km, it’s estimated to attract more than 12million spectators. It will be the first time Le Tour has visited the north of England, having previously made visits only to the south coast and to London.