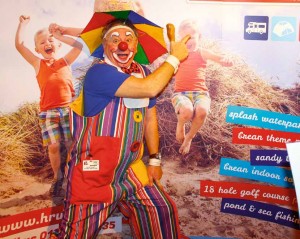 The resident clown on the Holiday Resort Unity stand was popular among the shows younger visitors at the Caravan, Camping and Motorhome show.

The UK’s largest start of season holiday showcase, the Caravan, Camping & Motorhome Show descended on the NEC in February and once again proved itself to be an unmissable exhibition.

With over 350 exhibitors and a host of well-known personalities, provided a popular platform for companies to showcase their latest products and innovations. The star-studded line up featured guest appearances from Olympic gold medallist Sally Gunnell, TV presenter Helen Skelton and DJ and former Big Brother winner Kate Lawler.

Popular TV personalities Ben Fogle and Matt Baker officially opened the show and later took to the Expert’s Theatre for a Q&A session with visitors. Matt, a two times BAFTA winning presenter with a love of the countryside, proved a hit with visitors as he helped to promote the work of The Caravan Club on its stand. Addressing first-day visitors, he said he was encouraged to see so many young people at the show and enthused about the benefits of families getting out and about together.

His counterpart, broadcaster, traveller and adventurer Ben also drew in the crowds as he delighted the audience with accounts of his adventures rowing across the Atlantic Ocean, crossing Antarctica on foot and running across the Sahara.

A highlight of the show was the dog agility displays, which returned to the NEC following the success of last year’s sessions. Demonstrating both agility and obedience, there were performances by Hall Green Retired Greyhound Trust, Romanian Rescue Dogs and Lucy Heath of The Company of Animals to name but a few.

Organised by NCC Events, a wholly owned subsidiary of industry trade body the National Caravan Council and supported by The Caravan Club and The Camping and Caravanning Club, the show brought together all the leading manufacturers, including Bailey, Coachman, Elddis, Lunar, Swift, Trigano, ABI and Adria, not to mention some of the UK’s leading dealers with many special editions to see.