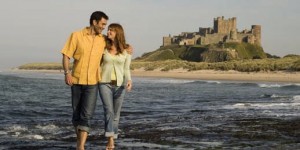 This year is likely to be a record-breaking year for people taking holidays in North East England. Pic: VisitEngland/Rod Edwards.

Caravan and camping parks in Northumbria say it is likely to be a record-breaking year for people taking holidays in North East England. Many of the 53 park businesses in the region – representing over 4,000 pitches in total – report bookings at their highest level for at least a decade. They say official figures showing that Northumbria parks currently generate around £27 million of visitor spending every year may now have to be revised upwards. Matthew Muckle of Coquetdale Holiday Park who is Northumbria branch secretary of the British Holiday & Home Parks Association, said that the revenue created by NE parks provides a life-line for many other enterprises in the region. “Virtually every penny of the £27 million which our parks generate benefits Northumbrian tourism dependent businesses,” he said. “Many of our members are now quietly optimistic that this year will see a rise in the present figure, not least because of the growing appeal of Northumbria for family holidays,” he added.