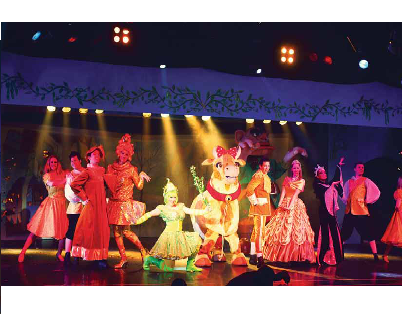 Butlins holiday resorts have always been known for their entertainment including seasonal pantomime performances.

Television is largely responsible for the public view today of holiday parks with some thinking the image of Hi-De-Hi and “Hello Campers” is still the style.
But today’s holiday parks are far more sophisticated, while still aiming to provide ‘fun for everybody’ – including the thousands of staff and entertainers across the UK who make holidays unforgettable for families.
We are probably all familiar with the colour codes of those in charge of entertaining at the biggest venues in Britain.
Redcoats for Butlins, Bluecoats for Pontins and Greencoats for Warners.
And then there’s the Yellowcoats of Haven Holidays staff – 300 FunStar entertainers .
Haven Holidays entertain over three million guests and owners during a 34 week season across their 35 family holiday parks.
Daytime children’s clubs and nightly entertainment are all included in the price of a Haven holiday and each year they introduce new elements to keep it fresh and exciting and for this they need bright new talent.
Steve Donnelly, head of entertainment, says: “My vision has been to embrace entertainment concepts that are current and in tune, such as The X Factor, Strictly Come Dancing, and Britain’s Got Talent.

“In particular it has been really important to identify current and future trends that will engage and delight the whole family. The days of jazz hands and sparkly frocks are gone for Haven.
“We want dynamic young cast members who can, aside from performing, interact meaningfully with the guests and take an interest in how they are enjoying their holiday.
“By developing and improving what’s on offer to them in terms of entertainment and events, we can enhance their time at Haven and they’ll want to come back again and again.”
Butlins holiday resorts have always been known for their entertainment.
Many big names in the world of showbiz started their careers at the ‘seaside camps’, as they used to be known.
Sir Cliff Richard started his career playing with The Drifters at the Clacton-On-Sea camp.
In 1962 the Skegness camp played its part in the formation of The Beatles, when Paul McCartney and John Lennon visited to meet Ringo Starr who was playing drums with Rory Storm and the Hurricanes at the time.
They offered Ringo the drummer’s position with The Beatles, because they had just secured a recording contract. The first song McCartney himself ever sang in public was “Long Tall Sally”, at a Butlins talent competition.
As well as the many other famous names to come through the Butlins doors, they’re probably most famous for their Redcoats. Employed originally by Sir Billy Butlin to help guests find their way around the resort and entertain them through their stay, Butlin’s Redcoats are just as big a part of the Butlins experience today as they were back at the start in 1939.
Many famous faces started life as Butlins Redcoats, including Stephen Mulhern (Britain’s Got More Talent, Catchphrase), Shane Ritchie (Eastenders), Johnny Ball (Think of a Number, Playschool), Des O’Connor, Jimmy Tarbuck and Dave Allen to name but a few.
Today Butlins entertainment and entertainers are still at the heart of any visit to the three remaining seaside resorts in West Sussex (Bognor Regis), Somerset (Minehead) and Lincolnshire (Skegness).
With more than 1.5 million guests visiting each year, the Butlins team work endlessly to discover new shows, ideas and talented people to entertain the visitors. 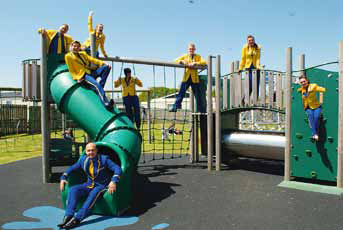 Haven FunStars are chosen for their good work ethic and great
customer focus.

This year Butlins is putting on a wide variety of brand new shows. Starting in February half term guests will be treated to the premiere of Scooby Doo Live, which combines live actors and characters in a musical mystery tour with monsters and ghouls!
Also making their 2014 debut in February are TV presenters and all round cheeky chaps Dick and Dom, who are bringing their unique style of mayhem into a live show for the whole family during all school holidays this year.
There will also be new live shows such as Freddie - a musical tribute to the music of Freddie Mercury and Queen - Cirque Du Hilarious, Titan The Robot and character shows from Angelina Ballerina, Mike The Knight, Thomas and Friends, Bob The Builder and Fireman Sam.
During the summer holidays Butlins will have a purpose built Big Top Circus at each of their resorts playing host to amazing aerial gymnasts, trapeze artists and comedy routines from around the world.
Mister Maker (CBeebies) will be playing all Butlins resorts over the summer with an exclusive live show, featuring music and special guests. Other summer entertainment includes The Wheel Of Death stunt team, live music, Redcoat shows and a spectacular acrobatics show.