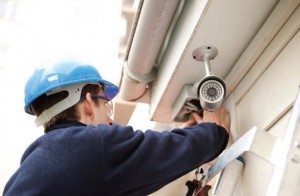 Above: Walk-in burglaries are known to increase during the summer months, so there’s no better time to assess the effectiveness of the security measures in place.

A man found guilty of burglary at Parkdean’s West Bay Holiday Park was recently handed a four year custodial sentence. During the trial, the jury heard how Anthony Bown had burgled the Nisa convenience store on the park, stealing cigarettes, cigars and tobacco worth £3,300.

In a separate incident, a cleaner admitted stealing electronic devices from caravans at Haven’s Devon Hills Holiday Park in Exmouth last summer. Richard Copley admitted two counts of burglary when he appeared in court and was subsequently jailed for eight months, suspended for two years, and ordered to pay almost £1,400 in compensation.

Incidents like these are unfortunately all too common in holiday park locations. While complete protection from such occurrences can never be guaranteed, there are a number of measures and precautions that holiday park operators can implement to safeguard their parks.

The good news is that the latest figures from the Crime Survey for England and Wales and police revealed that crime level fell by 16 per cent in 2014. Decreases were evident for all major crime types compared with the previous year; violence saw a 23 per cent fall, criminal damage fell by 20 per cent, and theft offences decreased by 12 per cent.

Above: The Irish-manufactured HKC system is backed by Crosby Intruder Alarms and offers a flexible solution for caravans, lodges, lockers and sheds.

Walk-in burglaries are known to increase during the summer months, so there’s no better time to assess the effectiveness of the security measures in place to ensure that your park is well protected.

“It is commonplace these days to have two or more televisions, Sky boxes and other audio and video entertainment systems. It can be lucrative for a thief to target these units, particularly in the closed season when there is less chance of being disturbed.

“There is also an increased risk of theft from lockers or sheds, as these often go completely unprotected.”

While simple measures such as door and window locks and burglar alarms offer some degree of security, Roy recommends an all in one wireless system for intruder, fire, personal attack and mains fail.

To read more of this story, please subscribe online.