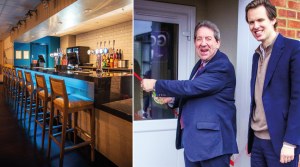 Local MP Gordon Henderson officially opened the new clubhouse at one of Kent’s most popular holiday parks, Golden Leas in Sheerness. The clubhouse is part of a recent £500,000 investment project at Golden Leas by Lovat Parks which acquired the business almost a year ago from its longstanding family owners. During his visit, Mr Henderson, who is MP for Sittingbourne and Sheppey, toured the park’s 22-acre grounds in the company of its general manager Jo Treadgold. Golden Leas has 350 privately-owned caravan holiday homes and lodges, and the new clubhouse will provide the focus for a raft of social activities and entertainment. It also includes a bar and cafe, a children’s club, and a shop which will focus on locally sourced food and drinks including many specialities produced in Kent. Sustainability, said Jo, was an important part of the park’s business philosophy, and the clubhouse has solar panels on its roof to generate heat for the building.