A holiday experience wouldn’t be complete without trying your luck on the prize crane or the coin tipping machine. In fact, the arcade has been a staple attraction of the Great British seaside holiday since the early 1900’s. Part of the Bourne Leisure group, Haven currently operates 37 arcades at its parks across the UK and has seen a shift from traditional arcades moving to all-encompassing family entertainment centres. “Our guest feedback indicates that arcades are a valued part of the holiday offering. 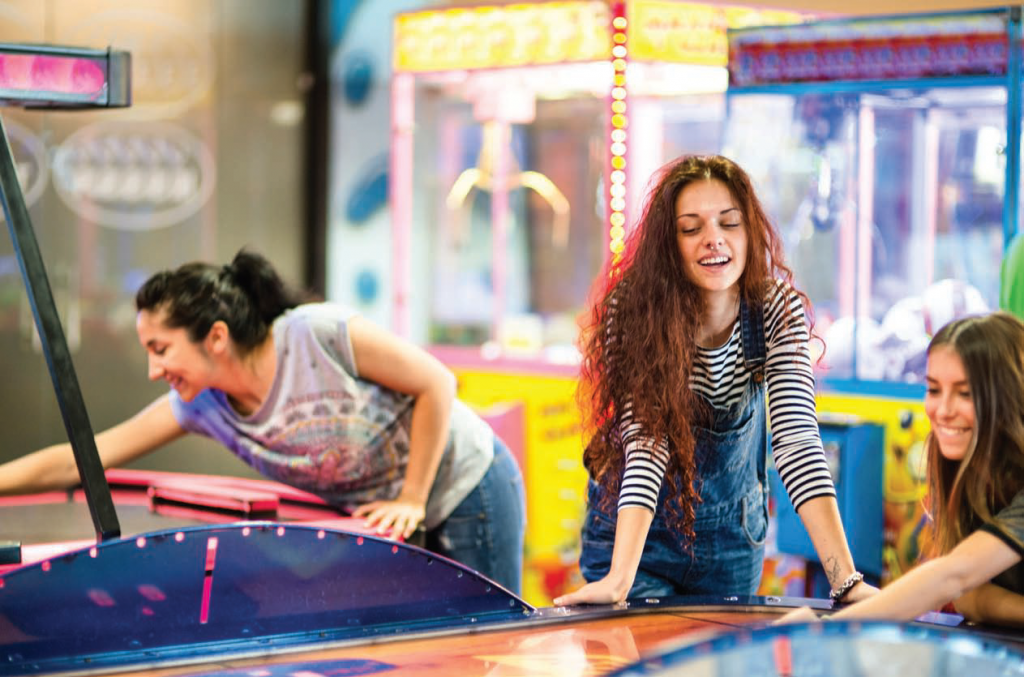 I wouldn’t suggest that anyone books a holiday based purely on the arcade offering, as we have seen a focus towards our Nature Rockz activities, but it is a very wellused facility and part of the overall holiday experience,” says Kevin Scott, Head of Arcades at Bourne Leisure. “The arcades are now environments where families can play together and often we include other family products such as soft play.” Redemption games, where the player is rewarded proportionally to their score, are Haven’s most popular arcade games, closely followed by cranes and coin pushers.

“We have expanded the redemption and prize offers at the expense of the gaming element of the business. A very high proportion of our games offer has a prize element which is very well received by both the holiday makers and our owners,” reveals Kevin. He adds: “Arcades have long been and are still very much part of the seaside family holiday and there is no indication to suggest that this will change in the near future.” Before investing in arcade games and equipment, it is advisable to seek advice from a reputable dealer or manufacturer, who offers a warranty and will give you fast and efficient after-sales care and service for the entire life of the equipment.

ATTENTION TO DETAIL  “Too many park owners become totally disillusioned by a particular attraction that has failed in the past and this fazes their judgement for ever buying anything similar ever again - all because they were badly advised in the very beginning,” comments David Robinson of World of Rides. He continues: “Never buy any rides or equipment based on the lowest price, as every month we receive at least one sad story of cheap failed equipment at peak times of the season, which has resulted in lost income, and more importantly, disappointment and lost customer satisfaction.”

World of Rides is a leading UK manufacturer of battery operated land and water-based leisure rides. The company’s three biggest selling rides for 2017 so far are the fully operational Driving School Car, which has all the same controls as any normal road car, the glow in the dark Future Bike, which has under-LED lighting, and the new Baby Beetle Car for smaller children. “Our entire 12v/24v range of rides are becoming very much more popular with holiday park owners, partly due to the fact that they are nearly all able to carry either two children or a parent and child, but also because they all run without any noise, air or water pollution,” says David. “With trade prices starting at only £2,750 each, they still remain the highest earning children’s rides, due to them being fully directional and interactive with the riders.” According to David, really good rides and amusements will normally achieve full return on investment a number of times over in any one season, providing that they are operated correctly and looked after.

LIFE SPAN  “All modern EEC and UK made rides have a long life expectancy, but in order to keep guests and visitors coming back every year, and incomes retained at their maximum, the rides should ideally be run on a rolling five-year-plan, with at least one new ride attraction being added to the park every year,” says David. “After that, each ride should be subsequently downgraded or replaced after year five, depending on its continued income potential and key position in the park,” he adds. For holiday parks that choose to hire their arcade equipment, it is advisable to work with fully vetted and experienced operators who use up-to-date rides that are tested and documented using H.S.E.-ADIPS safety testing every year. It is also important to check that the operator can show documentary evidence of themselves being fully insured for Public Liability for a minimum £10,000,000, in the event of any incident.

INSURANCE MATTERS  Another key consideration is to ensure that your arcade equipment is covered by a suitable insurance policy. According to Compass Insurance, the key message when it comes to rides and machines - whether they are relatively simple coin-operated equipment or larger, more complex facilities - is to have a conversation with your insurer or broker before you go ahead and sign a hire agreement or make a purchase. “Park owners and managers should be aware that your insurer or broker may decline cover,” advises Chris Jones, Retail Underwriting Manager at Thistle Insurance Services. “An increase in premium could otherwise apply – and in the worst case scenario this could make the rides or machines commercially unviable. It’s always best to have the conversation up front.”

To read more on this story, subscribe online today.