With a name that derives from the sparkling stretch of beach that runs alongside the park, Silver Sands Holiday Park is a traditional seaside resort located in Moray on the Scottish coast. 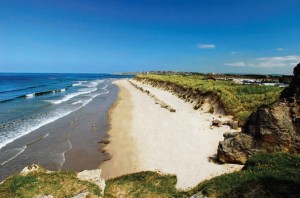 Silver Sands Holiday Park is a traditional seaside resort located in Moray on the Scottish coast.

Welcoming more than 4,000 holidaymakers each year between March and October, the park is also a busy hub of activity during the winter with almost 300 holiday home owners who visit their properties most weeks.
“There’s a very relaxed, family friendly atmosphere on park and our clientele reflects this, with a mix of families, older couples and groups of friends, mostly drawn from Inverness in the north and Aberdeen to the south. We have a number of holiday home owners which means there’s a buzz about the park at all times,” comments general manager Rebecca Grant.
Silver Sands was the fourth holiday park to be bought by the Bridge Leisure Parks group in 2014. Since completing the acquisition, the new owners have already undertaken a Grant attributes Silver Sands’ success to the dedicated team that runs the park. programme of investment in infrastructure and new facilities, leading to a fourstar quality award from VisitScotland in November.
“As with any change of ownership, existing customers were wary of a new company taking control of their park,” explains Rebecca. “But we have shown over the past 12 months that we will deliver the improvements we promised and create a super destination for all our guests. I think we’ve won them over!”

Silver Sands’ accommodation offering includes a selection of static caravans and holiday lodges, plus pitches for up to 100 tourers, motorhomes and tents.
Leisure facilities on-site include a newly refurbished entertainment venue, a games room, an outdoor adventure play area and a Kids’ Club with a regular programme of activities. There’s also an indoor heated swimming pool, sauna and steam room, as well as a state-of-the-art gym.
“We’ve got such a great mix of facilities, many of which have been refurbished over the past couple of years,” says Rebecca.
“Our entertainment venue was recently used by Britain’s Got Talent to host auditions for the TV show, which was really exciting for the local area. We feature live bands and put on our own shows and cabaret through the season.”

To read the rest of this feature, subscribe here...