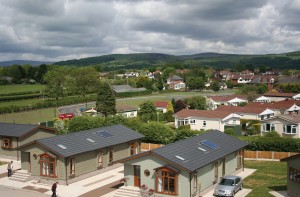 American influences on a Lancashire group of residential parks...

A trip to Florida in 2003 with a group of fellow park owners proved pivotal to Michael and Julie Ward, owners of four residential park homes in Lancashire.
“We travelled to the States to enrol in two courses at the Disney Institute including ‘The Disney Approach To Quality Service’ and spent time visiting parks and manufacturers, including a park in Sebring,” Michael explains.
“At its centre was a huge leisure complex with swimming pools, tennis courts, a function suite, computer rooms… the park owners were promoting an active retirement and we were hugely inspired.”
This American park became the catalyst for Michael’s vision for a new development: Acresfield.
Acresfield Park opened in 2010, an exclusive development of just 43, easily maintained, two bedroomed, detached bungalow-style properties, specifically designed for the over 55’s. The park is ideally located close to the historic market town of Garstang, where residents can enjoy shopping, golf, fishing, bird watching, as well as beautiful fell, canal and riverside walks. Acresfield is also situated just 30 minutes from the brighter lights of Blackpool and the coast. 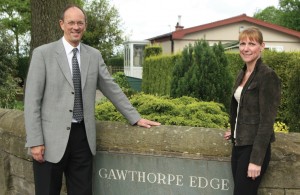 Nevertheless, Acresfield residents need never leave the park as it provides everything they need for entertainment on-site. Four years ago Acresfield Health Club & Spa opened. The club boasts a 15m swimming pool, sauna, steam room, Jacuzzi, a state of the art gym, a multi purpose hall for dance and fitness classes, indoor bowls, badminton and table tennis. There is also a bistro, hair studio, and a spa with three luxurious treatment rooms.

The Club is open for membership to the general public, however fi rst time purchasers of new homes on Acresfi eld Park receive free membership and homeowners on the other parks receive highly discounted membership. Michael refers to Acresfi eld Park and its attendant Health Club & Spa as the ‘jewel in the Residential Parks portfolio crown’. He is justifi ably proud. Last year, Acresfi eld Park and its adjoining sister park, Wyre Vale, featured on a Channel 5 documentary series. The episodes featuring the parks attracted between 1.2 and 1.4 million viewers, and resulted in many converts to the park home lifestyle.

“The TV series really showcased park home living at its very best,” says Michael. “We were inundated with enquiries and I think that this is probably one of the best pieces aired on TV, which depicts the excellent sense of community which park home living affords.”
It’s not all gloss and no substance… the Ward family are committed to providing their residents with ‘homes for life’. The parks, and their homes have been developed with a constant regard for the fact that the British population is an ageing one. The family is not only keen to promote an active retirement for residents, but they have also taken steps to ensure that they are providing homes that are accessible for those who suffer from disabilities, or the infirm. “To meet this challenge we designed, in association with two leading park home manufacturers, Prestige and Stately Albion, the Acresfield collection of homes,” explains Michael. “The homes have been very subtly adapted with wider doorways and turning circles for wheelchairs. Walls have been strengthened so that grab rails can be fitted if required, now or in the future, and low threshold shower cubicles or wet rooms are fitted as standard.” 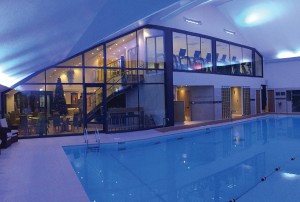 The homes also come with a 24-hour emergency call system and each home is fitted with a key safe to assist emergency access. Care for the environment and resulting cost savings have also been taken into consideration in the design and installation of the homes. “All of the homes are economically heated by mains gas; additionally, some have solar panels with under fl oor heating,” says Michael. “They are incredibly energy efficient and exceed the British Standard. Homeowners are also free to purchase their utilities from the supplier of their choice to find the best deal possible.”

The Ward family purchased their first residential park home estate in 1968. Michael and Julie are the second generation, becoming involved in the business in 1985. Winning Residential Park Owners of the Year, an unprecedented three times, over the years, their Parks have also won numerous Gold David Bellamy Conservation Awards including a Special Distinction Award. Michael and Julie own and operate four residential parks, one Holiday Park and a Health Club & Spa with the help of their daughter Sophie and son Alex. Their parks are all located in Lancashire: Gawthorpe Edge Park in Burnley, Lodge Park, Wyre Vale and Acresfield Parks in Garstang, and Merlewood Country Park, which is situated in the picturesque village of Little Eccleston.
Together, the parks extend to some 475 pitches. The close proximity of the parks means that the family can take a very personal interest in their day-to-day operation. They are supported by a loyal team of almost 40 people, many of whom have worked on the parks for over 30 years. “We really understand the importance of offering a quality service to our homeowners,” says Michael. “In this day and age, people are eager to criticise and less keen to commend, which is why we are so proud of our multiple resident-nominated awards.” The Ward family believe strongly that park homes such as these represent the perfect solution for customers of a certain age. As the demand for park homes increases, Michael believes that the Government needs to change its attitude towards park living.
Residents recognise park homes as acceptable, affordable housing and it’s time that the powers-that-be did too,” says Michael. “Park homes are an important provision within the housing sector for an ageing population and offer considerable flexibility, energy efficiency and cost savings. Local authorities need further encouragement to allow parks to expand and new parks to develop.”