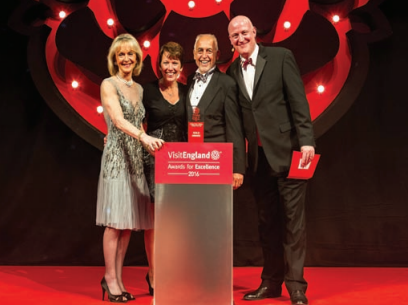 Woodovis Park owners John and Dorothey Lewis were delighted to take Gold in the Holiday Park of the Year category at the VisitEngland Awards of Excellence.

Woodovis Park near Tavistock was named as England’s top destination for camping and touring guests in the VisitEngland Awards for Excellence 2016. Members of the family-run business stepped up to receive their national trophy in March at VisitEngland’s glittering awards ceremony at Blackpool’s Winter Gardens.

Park owner John Lewis said everyone was extremely proud to have scooped three golds including the top VisitEngland award in its first ever entry to the competition. Darwin Forest Country Park was also recognised at the awards after taking Silver in the Holiday Park of the Year category.

Speaking on behalf of Darwin Forest, chairman Hugh Grayson said: “This award is a testament to the quality and commitment of all our staff, the majority of whom are from the local area.”