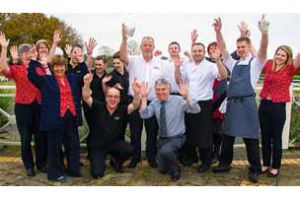 Hoburne Bashley, on the boundary of the New Forest National Park, was named the top Caravan Holiday Park and Holiday Village of the Year at the awards ceremony hosted by Tourism South East in West Sussex.

Hoburne chairman, Rosie Kennar, said: “This is absolutely fantastic news and richly deserved by our superb Bashley team. This celebration marks the end of another successful year for Hoburne. We have enjoyed the most incredible summer; bookings have risen year-on-year again, we won the coveted UK Family Business of the Year award and earlier this month Hoburne Naish won the Hoseasons Diamond Award for the best family fun holiday park in the south of England.” This is the second year Hoburne has triumphed at the awards; Hoburne Naish in New Milton was awarded silver in 2012. Hoburne Bashley will now go on to compete in the VisitEngland awards next year.

Tourism South East chairman, Ken Robinson CBE, added: “It is great to see such excellence rewarded. The awards represent the culmination of hard work and dedication by the best tourism professionals, in our best tourism businesses, that have been recognised for providing such outstanding customer experiences. I look forward to seeing our winners go on to represent the South East on the national stage at the Visit England Awards for Excellence in 2014.”