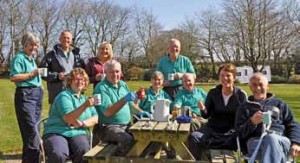 The Woodovis Park team is celebrating being named the Best Holiday Park and Camping Site in Britain.

The Awards saw more than 2,400 contenders whittled down to a shortlist of 61 businesses nominated for 15 awards. The winners were announced at the annual Green Tourism Conference held at the AT-Bristol Science Centre to mark the culmination of Green Tourism Week.

Accepting their award from environmental activist, Satish Kumar, John Lewis from Woodovis Park said: “We are bowled over to be named the greenest holiday park in the whole of the UK.

“Preserving our beautiful surroundings here remains one of our top priorities and we’re always looking for ways to improve our eco credentials. To have this acknowledged in the Goldstar Awards is phenomenal and will help give us a renewed boost in our efforts.”

Now in their third year, the Green Tourism Goldstar Awards honour those businesses and organisations that have done the most to promote sustainability within the industry by implementing cost-saving practices that help the environment, improve customer services and benefit the bottom line.