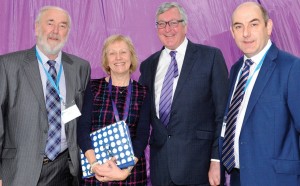 The British Holiday & Home Parks Association (Scotland) was attended
by many senior members of BH&HPA Scotland’s 200-plus park businesses.

Providers of ‘fresh air holidays’ in Scotland met in Edinburgh in December to hear tourism minister Fergus Ewing praise their invaluable support of rural economies. Mr Ewing was speaking at the annual conference of the British Holiday & Home Parks Association (Scotland) attended by many senior members of BH&HPA; Scotland’s 200-plus park businesses. The event brought together the managers and owners of businesses credited with generating just over £700m of visitor spending annually. “The holiday park sector offers good quality accommodation for all types of visitors, and helps to sustain employment in some of Scotland’s most remote and rural areas,” said Mr Ewing. Mr Ewing also noted that parks had also helped contribute to increasing overseas visitor numbers which were up by 4 per cent compared with last year, and their spending up by 10 per cent.