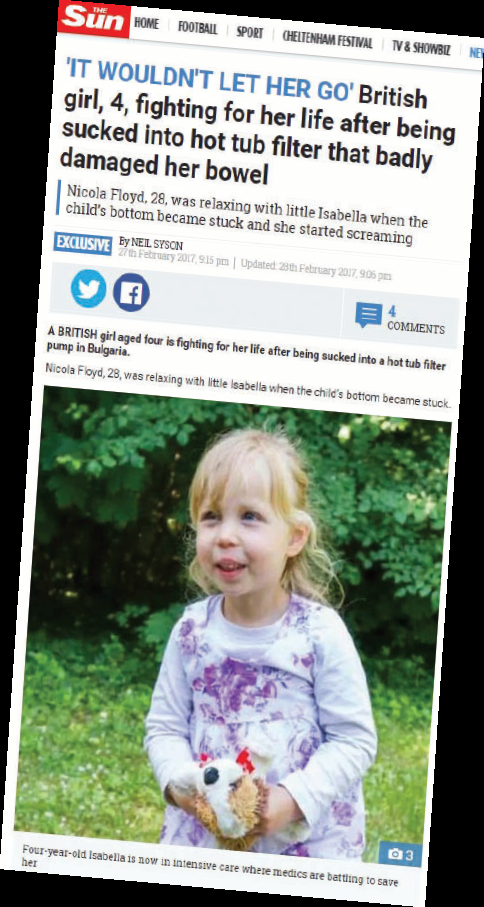 A four-year-old British girl is recovering after being sucked into a spa filter at a hotel complex in Bulgaria.

Holiday park owners are being urged to show duty of care when it comes to the swimming safety of their guests. Earlier this year, a four-year-old British girl was seriously injured after being sucked into a spa pool filter at a holiday complex in Bulgaria. Thankfully, doctors were able to save the girl’s life and she is now recovering from severe injuries to her bowel and intestines. An incident of this kind is known as ‘entrapment’ and is entirely preventable, and only happens because what appears to be a perfectly safe outlet is, in fact, a potential death trap.

Every year incidents of entrapment – where limbs and other body parts are caught via strong suction from drains at the bottom of either private or public pools – are reported in the media, tragically because the event often results in drowning. But worryingly many incidents are also going un-reported. The Blue Cap Foundation in the Netherlands conducted an investigation into swimming pool entrapment at 100 hotels and aqua parks in popular European holiday destinations. They found at least one hazardous circumstance in every swimming pool that could cause an injury and 31 of the pools were condemned to be dangerous and even life-threatening.

“The problem is that there is nowhere to report this type of incident and most holiday companies are nervous about action been taken against them from over reactions,” comments Craig Valentine, Health & Safety Manager at Bourne Leisure. “I think that there should be a confidential hotline or email address that such incidents and other pool-related issues could be reported without reprisal. In turn this would help stop dangerous incidents happening by using industry best practice with learning outcomes.” Many UK companies have been campaigning to raise awareness of the dangers of entrapment for years. These include Mineral Supplies International (MSI), which has supplied the Vac-Alert anti-entrapment device to UK and European markets since 1996.

Installed on both pools and hot tubs, the Vac-Alert responds within a millisecond to any increase in filter pump suction; spring-loaded pistons open the pipe to atmosphere, freeing a person trapped by life-threatening suction. “Entrapment is a serious issue globally,” comments MSI’s Amanda Slade. “But what’s concerning is that many cases of entrapment are going unreported and are being put down to ‘accidental drowning’. After all, no pool operator wants that type of bad publicity.” Amanda adds: “This is why we have been working with major holiday operators and cruise liners who want to demonstrate that they will put duty of care first every time when it comes to their customers.”