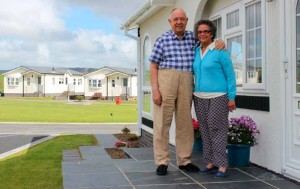 When Verna and Ricahrd Culpeper visited Scamford Park with a view to investigating park homes, they knew immediately that it was the place for them.

Verna and Richard Culpeper had lived in their three bedroom, semi-detached family home in leafy Harrow for 37 years when their daughter suggested it might be a good idea to move closer to her. As she lived on the west coast of Wales, she was worried that as they became older, with an eight-hour round trip between them, she wouldn’t be able to take proper care of them.

Having spent lots of time in Pembrokeshire over the years, Verna and Richard were familiar with the area, had friends and family nearby and liked the idea of being able to spend their retirement years there. They began to look at suitable properties and dismissed their initial choice of bungalows as they were either too expensive or needed a lot of work.

When they visited Scamford Park with a view to investigating park homes, they knew immediately that it was the place for them. Peaceful, friendly and with stunning views over the open countryside, the Culpepers could see themselves living a fulfilling and happy life there. They could also see that the park owner, Jason Hartley, took real care over the park and its residents’ well-being.

They immediately put down a deposit on the show home that they looked around, an Omar Colorado 44ft x 22ft and put their house on the market, expecting it to sell quickly as it had a big extension, thus making it one of the best properties on the street. At first, everything seemed to be going well and they soon accepted an offer. Unfortunately, the lady who had submitted the offer then became uncontactable and eventually they had to accept that she had no intention of going through with the purchase. Undeterred and with Jason being very understanding about the delay, they put the house back on the market.

Eventually they found another buyer, but unfortunately he messed them around several times, eventually pulling out of the sale as there was no planning permission documentation for the extension, despite the fact that it had been completed 50 years previously.

Verna explains: “We hadn’t sold a house for 37 years and needed some help. Unfortunately we felt that the estate agent was not ‘on our side’ and the situation just got worse and worse”.

Seeing the great deal of stress that Verna and Richard were under, Jason suggested that they might like to think about using Quick Move Properties to part exchange their house so that they could buy the park home.

To read more on this story, subscribe online today.