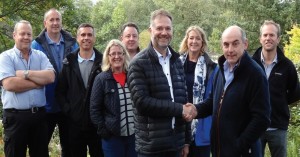 Senior executives from the Caravan and Motorhome Club took a behind-the- scenes look this autumn at a major Lake District holiday park which is meeting new staycation opportunities. Skelwith Fold in Ambleside was the venue for the visit following a study tour earlier in summer to the Club’s Coniston Park Coppice by members of BH&HPA’s Cumbria branch.The delegation was headed by the Club’s director general Nick Lomas, and the aim was to see how one of the organisation’s commercial counterparts was adapting to an evolving market. Skelwith Fold director Henry Wild, who led the tour of the 130-acre grounds, said there was ample evidence this year that the demand for holidays in the UK was continuing to rise. The trend, he believes, is helping to introduce more families to the notion of a British park holiday, especially via “glamping” with its appeal to a very broad spectrum of visitors.