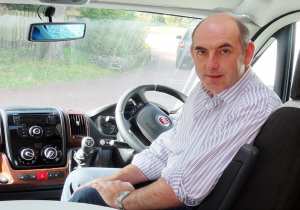 Fragile areas such as the Lake District should be doing all they can to woo visitors in motorhomes, according to the owner of a major Cumbria holiday park. Henry Wild of the 130 acre, Skelwith Fold, in Ambleside, says that people using such vehicles are helping to drive up the use of transport considered more environmentally friendly. Buses, bicycles and two legs are the preferred ways of exploring Lakeland for many of Cumbria’s thousands of motorhome users each year, says Henry. As such, he says, motorhome visitors help reduce congestion on the roads, and minimise the release of harmful greenhouse gas emissions into the atmosphere. Last summer, Henry reports, motorhome visitors to his park grew by 8% compared with the previous year, and are fast gaining ground with many younger couple and families. But despite their size, he believes, motorhomes should be hailed as green holiday heroes – as long as they opt for holiday park pitches and not roadsides or public car parks.

TOURISM TRAFFIC
Much of the tourism traffic seen on Lake District roads is likely to belong to people who have already checked in to their destination, and who are now enjoying the sights,” said Henry. “By contrast, motorhomes will often spend the entire duration of their stay parked-up whilst their users find alternative ways to tour around and get to where they want to go. “The same will apply in many other rural areas, and suggests that we should be encouraging motorhome visitors in parts of Britain where the countryside is deemed to be at risk,” added Henry.