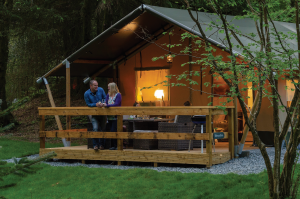 Boosted by what was the hottest summer on record, the UK’s holiday park sector has never been so appealing. More Brits each year are continuing to enjoy all that the country’s parks have to offer - and what an offering it is. From quirky wigwams and shepherds tents to deluxe lodges and cabins, today’s holiday parks and campsites are better equipped than ever before for their increasingly discerning guests. Accommodation features that were once considered luxurious are now seen as the norm. Take glamping as an example. Nobody needs to be reminded of the rise and rise of glamping, but what is noteworthy is how such accommodation is fast moving from fringe to mainstream. Rather than just providing a handful of pods alongside their traditional holiday homes, some parks are now dedicating large sections of their grounds to a variety of glamping modules, creating in effect a mini-village for guests seeking this type of experience. There are also instances of parks swapping a number of their seasonal or touring pitches for this style of accommodation, purely as a response to customer preference.

Glamping is also broadening the appeal of taking a holiday on a park to couples and families who might otherwise not have considered the option. In many cases, this might have been because they hadn’t quite grasped the concept of what a park offers in terms of its rented accommodation, or simply because the guests weren’t keen on camping. By contrast, the idea of staying in a shepherd’s hut, safari tent or hobbit house is easy to understand, and provides an element of adventure and fun with which it is easy to engage. “If glamping is an example of camping on an upward trajectory as far as quality is concerned, then the same can also be said of caravan holiday homes,” comments Jon Boston, a spokesperson for the British Holiday & Home Parks Association (BH&HPA). “Many of these now have levels of refinement far beyond what a customer would expect as standard a decade ago, including features such as en-suite bathrooms, exterior decking, wide-screen TVs and sophisticated sound systems.” Jon adds: “UK manufacturers have proved themselves adept at constantly refining their product, but there may be some evidence that holiday lodges will become more dominant in the future. Some park groups are now favouring lodges over holiday caravans when developing new pitches, both for sales and rental.”

The extra space in a lodge can make for a more comfortable stay, especially if the customer is holidaying with an extended family or friends. For rental purposes, lodges also enable parks to offer a more luxurious experience. Some lodge breaks are now being styled along the lines of a boutique hotel with added features such as robes and slippers, upscale toiletries, bubbly in the fridge, and even fresh croissants delivered in the morning. Says Jon: “The trend towards more highly specified caravan holiday homes and lodges is also consistent with the move by many parks to extend their opening seasons. Local authorities would appear to be increasingly more accommodating when faced with such requests from parks, recognising the wider economic benefits to be gained from lengthening the holiday year, not least among the many businesses in their area which depend on visitor spending.” He adds: “With modern holiday homes now providing highly efficient central heating systems as well as double glazing and increased levels of insulation, holidays throughout the four seasons become much more practical.”

At Skelwith Fold caravan park in the Lake District, new accommodation trends are enabling park owner Henry Wild to broaden his customer base. The Ambleside park has around 450 pitches for holiday home owners and touring guests – but camping is not permitted: “This once meant that Skelwith Fold was only open to people with a touring caravan or motorhome, so we were limiting our guests to people who already understood the park product,” comments Henry. “A few years ago, however, we decided to remedy that by introducing top-end glamping modules for hire, based on the Swift S-Pod. This immediately extended our appeal to couples who might never before have considered using a park for a holiday.” He adds: “Their success encouraged us this year to invest in two safari tents, fully furnished and kitted-out, which are also proving immensely popular, especially with younger families.” While glamping is great for generating additional revenue, Henry believes that the real value of this accommodation is in generating interest in holiday home ownership. At least fifteen sales of holiday homes on the park over the past few years can be attributed to glamping stays. 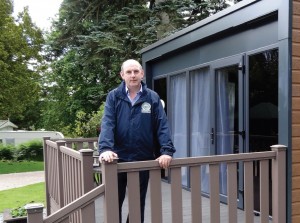 “Many people typically book for three or four nights and that is sufficient for them to get an idea of what life could be like for them as owners. It’s surprising just how many on their last day ask if they can just take a quick look at one of our show homes before they leave!” says Henry. He adds: “As an industry, we have always known that a better understanding by consumers of what we offer could widen considerably our market potential. Glamping is doing the job far more effectively and economically than any amount of advertising could achieve.”
Switched on park owners who want to keep abreast of the everevolving world of park accommodation can get a first glimpse of the new 2019 models at the HERCMA Shows at The Lawns and Beaulieu this Autumn. Some 300 models of touring caravans, holiday homes, lodges and park homes will be on display at the shows, which run from September 4th – 6th (The Lawns) and September 21st – 23rd (Beaulieu).

“The industry overall is enjoying a good year with retail sales on the rise in all sectors, in particular with holiday homes and park homes,” explains Michael Ritchie, Event Manager of the Hull and East Riding of Yorkshire Caravan Manufacturers’ Association (HERCMA) Shows. “Customers want more and more creature comforts in their holiday homes and manufacturers strive to keep pace. Electronic gadgetry is now common in many of the higher priced units and in recent years there has been a rise in the popularity of twin units for both holiday and residential use. In fact, there will be a record number of twin units on display at The Lawns show this year – nearly 40 of them from 13 different manufacturers.”The Lawns show has been running for more than 40 years at The Lawns in Cottingham. It is run by HERCMA, which comprises five manufacturers from the region: ABI, Carnaby, Coachman, Swift and Willerby. Open to the public, the show attracts well over 20,000 visitors each year. “There will be numerous new product launches – as always at The Lawns,” promises Michael. “ABI and Swift are unveiling additional twin units with highly imaginative layouts; Willerby will be unveiling its range of park homes; and companies such as Pathfinder, Prestige-Homeseeker and Omar-Wessex always have stunning new designs on show and are promising the same this time.” Commenting on the future of holiday park accommodation, Michael adds: “I think that holiday caravans, lodges and park homes will continue to evolve, according to customer requirements, becoming, along with parks, more and more energy efficient, providing some of greenest and most environmentally holidays and residential accommodation available. While there may be short-term problems with issues such as Brexit, the longer-term future looks pretty good.”

THE LAWNS AND BEAULIEU SHOWS 2018
www.lawnsandbeaulieushows.com