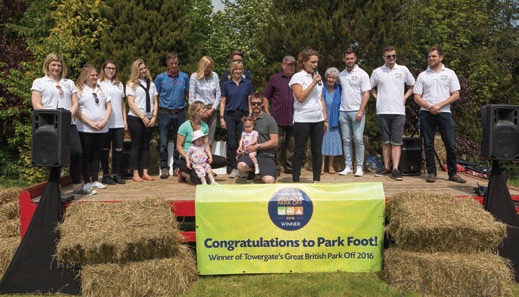 Park Foot was named the winner of Towergate’s Great British Park Off 2016.

Park Foot Caravan & Camping Park in Cumbria has been crowned the winner of the Great British Park Off 2016.
The park received the most public votes in the competition, organised by Towergate.
This year’s competition attracted over 3,000 nominations and was the second year the specialist insurance broker has run a nationwide search to find Britain’s most treasured holiday park.
The parks were judged by a specially selected panel and were whittled down to a shortlist of ten. Those parks then battled it out in the public vote for the prestigious title and £1,000 grand prize.

Fiona Bell from Park Foot commented: “We would like to thank everyone who voted for us. The awards have come at a much needed time due the floods we have experienced the best part of 2016. This is a fantastic boost for us and a great reminder to caravanners everywhere that we are definitely the park to visit.”
The two highly commended parks in this year’s competition were Sandy Balls Holiday Village in the New Forest and Wooda Farm Holiday Park in Cornwall.