A North Herefordshire activity centre is reaping the benefits of its highly successful glamping villages, which have seen year on year growth of over 100 per cent.
Business is booming for Oaker Wood Leisure near Leominster, since it launched its second woodland glamping village at the start of 2015. 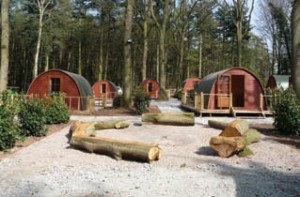 Oaker Wood Leisure launched its second woodland glamping village at the start of 2015 and says overnight stays there are up by more than 100 per cent.

Kate Tudge of Oaker Wood Leisure explains: “We have been offering overnight camps as part of our outdoor activity site since 2009 and launched our first pod village in 2014. As we offer group exclusivity, we quickly reached maximum capacity in the one village, so over the winter of 2014/15 we built a second village.”
Each village is made up of nine wooden pods, made locally by Jaques International and can be booked exclusively by groups which has proved popular with corporate team building groups and stag and hen parties.
School and youth groups visits have also increased year on year with the second glamping village meaning Oaker Wood can now accommodate groups of up to 120 young people.
This rapid growth has meant that Oaker Wood Leisure has offered increasing employment opportunities in rural North Herefordshire. Although some work is seasonal, the company has been able to offer permanent employment to a growing number of young people.
Kate adds: “We’ll never say never to developing a third village, or possibly some on-site chalets.”