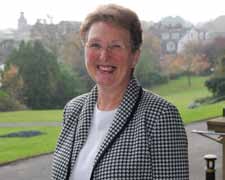 Anne Dearling has taken on the role of chairman of the Caravan and Camping Club,
after being a member for 31 years.

For the first time in its history the Camping and Caravanning Club’s National Council has both a female chairman and president at the same time, following the election of the new chairman, Anne Dearling.

Formerly vice-chairman, Anne joins club president Julia Bradbury who was chosen by members at the Club’s AGM in October 2013.

“Becoming the Club’s chairman means the world to me – it’s the ultimate accolade,” said Anne of her appointment.

Anne lives in Cornwall with her husband and they have both been Club members for 31 years. She has fulfilled various administrative positions within the Club, at District Association, Regional and National Council level, which Anne says has given her a solid understanding of the Club. Anne will now be responsible for overseeing the Club’s executive, management and main committees, and her role is the pinnacle of the Club’s democratic committee structure.

Robert Louden MBE, director general of the Camping and Caravanning Club said: “I’m delighted to welcome Anne as the new chairman. Her energy and enthusiasm for the club, and for all things camping, shine through in everything she says and does.

“We look forward to the Club growing and continuing to deliver great experiences for its members during Anne’s term of office.”