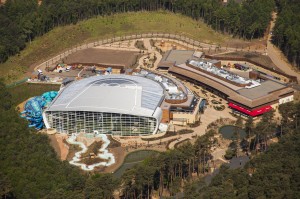 Center Parcs has welcomed its first guests to the new Woburn Forest village in Bedfordshire.

The doors were officially opened at the fifth Center Parcs village on Friday June 6th, with an estimated 350,000 guests expected to visit each year. It is hoped that the village will inject over £20 million into the regional economy annually.

Martin Dalby, CEO of Center Parcs, said: “After years of hard work, dedication and passion, we’re thrilled to be welcoming our first guests to Woburn Forest and strongly believe the new village has all the ingredients for a very special family break”

Woburn Forest is one of the largest development projects of its kind in Britain for many years and represents a £250 million investment. Center Parcs owners Blackstone invested £100 million in the project whilst the remaining £150 million was financed from four UK lending banks.

“Center Parcs Woburn Forest will provide a massive boost to the area,” says Martin. “In addition to the 1,200 people employed in the construction of Woburn Forest, we have recruited and trained 1,500 employees, most of which live within a 15 mile radius. These are local jobs for young local people.”

Last year Center Parcs welcomed 1.7 million guests to its four existing Villages, the opening of Woburn Forest will increase that figure to over 2 million.