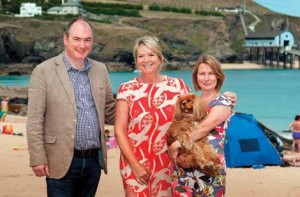 Fern Britton, who sacrificed part of her and her husband Phil Vickery’s holiday in Cornwall to help highlight the free holiday scheme, was taken around Mother Ivey’s by Patrick and his wife Meg

The former star of ITV’s This Morning was at Mother Ivey’s Bay Holiday Park in Padstow where the initiative, described by Fern as ‘a genius idea’, is being pioneered. She said that her own happy memories of holidays in Cornwall, and her belief that a family holiday is ‘not a luxury but an essential’, had persuaded her to freely lend her support. The scheme is the brainchild of Patrick Langmaid, owner of Mother Ivey’s, who has pledged to give away a week’s holiday to a needy family for every hundred bookings his park takes.

With the scheme already in action, Patrick hopes that the number of families enjoying no-cost stays at his park will be into double figures by the end of the season. He hopes too that his initiative will also be adopted by many of the UK’s other 3000- plus holiday parks as part of a national effort to provide holidays to families in crisis.

Mother Ivey’s beachside park has been owned by the Langmaid family for 25 years, and has 60 holiday caravans for hire. Three years ago, it won the tourist board accolade for the best holiday park in the South West. Patrick said a number of other South West holiday parks had already committed to his charity initiative including the Surf Bay Holidays group and Hendra Holiday Park in Newquay. “I really believe that this idea has huge potential to make a significant difference to the lives of struggling families, and I would like to see as many other parks on board as possible,” said Patrick.

“Offering one holiday to charity for every hundred holidays booked is practical and possible without incurring any major outlay,” he added. “The real cost of providing holidays is in maintaining the infrastructure of the park and the holiday homes, and this is generally covered by normal commercial activity.

“Every park has some spare capacity during the year, so to give some of those holidays away to needy families makes perfect sense. Parks will only have to bear the marginal cost of cleaning, laundering and energy.