Fantasy Pod Is A Labour Of Love 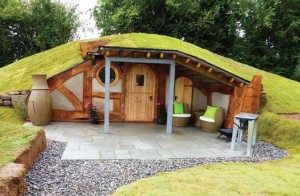 The Hobbit house at Townsend Touring Park is proving a magical place to stay.

An unusual new glamping pod on a Herefordshire holiday park has attracted bookings from JRR Tolkien fans and Hobbit buffs this summer. The Lord of the Rings-style pod on Townsend Touring Park near Leominster may look like a magical medieval retreat but its facilities are firmly rooted in modern times. Built beneath a grass-covered mound, the five-berth dwelling boasts a fully equipped kitchen, heating, television, bathroom and a host of other mod-cons. Inspiration for this new take on glamping came from the park’s owners, Geoff and Su Smith, who already offer more conventional pod accommodation at Townsend. “Some guests tell us that there is an almost magical quality to this area, so it seemed entirely fitting to build a pod which had an air of fantasy about it,” said Su. “It’s been a labour of love for us, and we’re delighted with the results – as are our guests who say the quality we’ve achieved is a perfect match for the surroundings.” Such has been the success of the pod – which is built off-site to a modular and scalable design – that two more units are now in production for installation early next year.