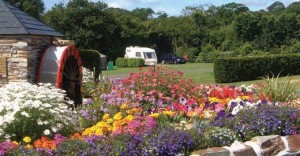 Covering 12 acres of tranquil countryside, Trethem Mill attracts thousands of camping and touring caravan visitors each year from the UK and overseas.

Trethem Mill Touring Park in Cornwall is celebrating a triple triumph of awards, including an accolade for its work to protect endangered honey bees. The family-owned business celebrated its first honour when judges in the Cornwall Tourism Awards crowned it as the county’s finest caravan and camping park. The park’s environmental policies were marked in the second of the accolades it received this month from world-famous botanist David Bellamy. Professor Bellamy presented the park with his prestigious Conservation Award at its top gold level, recognising the raft of initiatives taken to safeguard the natural world. The hat trick of accolades was completed when David Bellamy also designated Trethem Mill as an official “Honey Bee Friendly” park as part of his new initiative to prevent the insects’ decline. Park owners Ian and Jane first moved to Trethem Mill with Ian’s parents – Derek and Lorna - 24 years ago, and Jane says the park’s success has been very much the result of a team effort: “Very sadly, Lorna passed away earlier this year – but she believed strongly, as we all do, in trying to make Trethem Mill a place for creating truly memorable holiday experiences,” said Jane. “We would like to see these awards as a tribute to her passion for this part of Cornwall, and to making the park a match for these beautiful surroundings.”