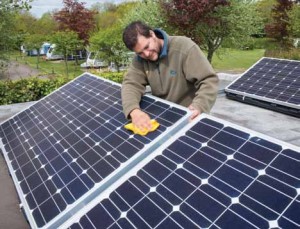 The multi-award winning, family-run, Oakdown Holiday Park is the only holiday park in East Devon to hold an AA Five Star pennant.

Oakdown is owned and run by the Franks Family; Doreen and Roger, Alastair and Andrianna and their team of dedicated staff. It is the only holiday park in East Devon to hold an AA Five Star pennant 2013/2014 – the equivalent of a top star rated hotel.

Oakdown Holiday Park is located between Branscombe and Sidmouth on the East Devon Heritage coast and lies within East Devon’s designated Area of Outstanding Natural Beauty. Its owners, The Franks family, have farmed the area for five generations, introducing the first static holiday caravan to the farm in 1951 and opening as Oakdown Holiday Park, catering for campers and touring caravans as well as statics, 21 years later.

The Franks continue to work hard to maintain a consistently high level of customer satisfaction and strive to be top of the game in all aspects of holiday park life. The driving factor behind what they do came from the vision to become a ‘green’ holiday park - a vision that was established before the concept of green tourism was even invented. Oakdown was the recipient of one of the very first David Bellamy Gold Environmental Awards in 1997 – an accolade it has continued to be awarded every year for the past 16 years.