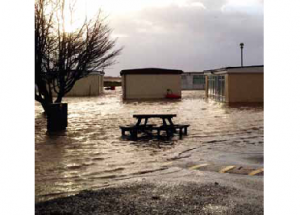 With Wales and the South West hardest hit, holiday parks have been left counting the cost of the wettest winter since records began.

According to the British Holiday and Home Parks Association (BH & HPA), hundreds of its 2,000-plus park members suffered damage during the month-long onslaught from the weather. Few sites escaped completely unscathed from the violent storms in addition to sea and river flooding.

Among those affected, 70 static chalets were flooded at the Carmarthen Bay Holiday Village in South Wales, and 20 residents were rescued from Bablockhythe caravan site in Oxfordshire, following the River Thames bursting its banks in February.

However, thanks to the fast action taken by many holiday parks and their insurers following the destructive storms of winter, it’s likely to be business as usual for the majority of the industry this spring. “It is a credit to the prescience and resilience of the industry that preparations for the winter months protected so many park assets,” said a spokesperson for the BH & HPA said.

“Where there was damage, many were able to stage a very rapid recovery from the weather’s attack.” Repair and restoration work was often underway within days of parks being hit, helped by insurance loss adjusters who frequently attended within hours of receiving emergency calls.

The spokesperson added: “The total bill for putting the UK parks industry back together after the freak storms has not yet been assessed, but will certainly run to millions of pounds. However, the cost is unlikely to impact on what families will pay this year or in the future for their holidays, or for buying a holiday home.”